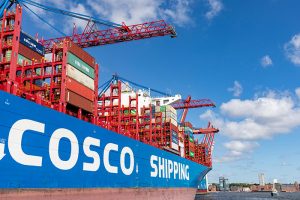 Both the members of THE Alliance and the 2M Vessel Sharing Agreement have
formally announced a new series of blanked sailings between Asia and Europe
in October as cargo demand is expected to slow down during and after the
Golden Week holiday in China (first week of October). This shows that the carriers
will continue their cautious approach to avoid overcapacity and that they
have mastered the art of fine tuning their capacity to match it with market demand.

Carriers have been blamed recently of artificially reducing capacity to push up
rates, but the past weeks have proven that this is not the case. Capacity has
been increased since May by reinstating blanked sailings, resuming suspended
services, launching new services and organizing extra ad hoc sailings on the
two big East West trades. Average weekly nominal capacity in the trade between
Asia and North America is expected to exceed 500,000 teu this month
for the first time as MSC has announced the start of another Far East-West
Coast of North America service, branded as ‘Santana’.

The steady capacity increase has not prevented a further rise in spot rates for
Chinese exports. The average spot rate between Shanghai and California hasreached 3,639 USD/feu last week according to the Shanghai Containerized
Freight Index (SCFI), which marks its highest level ever for
the fourth time in the last five weeks. These rates are up 167% compared
to their low of 1,361 dollar/feu in early March.

Spot rates between Shanghai and Los Angeles or Long Beach now
largely exceed rate levels between Asia and Europe despite the much
shorter sailing distance. The SCFI showed a rate of 2,058 USD/feu
last week between Asia and North Europe, which is up 42% compared
to their low in mid-April.

Most big carriers are profitable despite the COVID-19 pandemic as
this is the first major crisis which they did not tackle by chasing more
market share and fighting a rate war.

The disastrous effects of previous rate wars and the operational
mess following the collapse of the Korean carrier Hanjin Shipping in
2016 have not been forgotten. The good results of the carriers are of
course not only the result of disciplined capacity management which
is new to the liner industry, but also largely influenced by the fact that
bunker prices have dropped considerably.

September is expected to be a very strong month for the carriers with
a peak in cargo demand as Chinese exporters will be shipping out
more cargo ahead of the Golden Week holiday. Maersk and MSC will
react to this by introducing megamax ships such as the 19,437 teu
MSC ERICA and the 18,340 teu sisters MARCHEN MAERSK and MARIBO
MAERSK in the seasonal Asia-Europe ‘AE-55 / Griffin’ service,
which was to date serviced with 14,000 teu tonnage.

The first three sailings of the ‘AE-55 / Griffin’ service in October will
be skipped as part of the 2M blanking scheme for the Golden Week.
Maersk and MSC will also cancel the 3 October sailing of the 20,568
teu MURCIA MAERSK for the Far East-North Europe ‘AE-5 / Albatross’
service. MSC has re-confirmed this week that both the Far East-N Eur
‘AE-2 / Swan’ and Asia-Med ‘AE-20 / Dragon’ services remain suspended
until further notice.

THE Alliance will not offer extra Asia-North Europe sailings under the
‘FE4’ label in October. Apart from these five blanked ‘FE4’-sailings,
one sailing each of the ‘FE2’ and ‘FE3’ loops will be omitted. None of
the three Asia-Med loops will offer a departure from China in week
41 and export cargo will have to wait for the sailings in week 42.

The OCEAN Alliance has not formally announced a blanking scheme
yet but latest schedules show already three skipped sailings in Asia-
North Europe loops whereas a fourth sailing will be cancelled as the
Evergreen operated ‘CES’ service (aka ‘NEU7’) will only offer two departures
in three weeks with a ten day interval.